Petroleum refining or Oil refining is an industrial process in which crude oil is extracted from the ground and transformed and refined into useful products like Liquefied Petroleum Gas (LPG), kerosene, asphalt base, jet fuel, gasoline, heating oil, fuel oils etc. Crude Oil consists of hydrocarbon molecules. There are three steps in the Petroleum refining process – Separation, Conversion, and Treatment. It would not be possible to travel by vehicle without petrol or diesel oil. Learn how do we obtain petrol and crude oil and also more about petroleum or oil refineries. Petroleum is a substance that occurs naturally. It is a dark liquid. It occurs beneath the earth’s surface. A large number of products like petrol, diesel, lubricating oil, etc derive from petroleum. Its compounds can be separated with the help of fractional distillation. In the year 2006, primary sources of energy consisted of petroleum 36.8%, natural gas 22.9%, and coal 26.6% share for fossil fuels in primary energy production in the world. 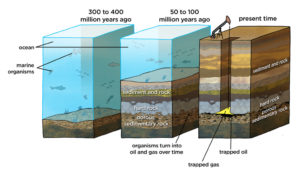 It takes around millions of years for petroleum to form. It is formed due to the presence of decomposed carcasses of dead animals beneath the surface of the earth. These carcasses of dead animals are subjected to extreme pressure and heat. Over centuries, millions of animals lived and died to become fossilized, just in case of plant-based matter. Similarly, in the ocean, oceanic creatures drowned to the bottom of the ocean and got buried under the sand and rocks.

Decayed due to the presence of bacteria, the decomposed organic matter got buried deeper and deeper over the years. Over millions of years, high temperature, high pressure, the absence of air converted the dead animals to petroleum and coal. This liquefied form of dead organic matter is petroleum or crude oil. Crude oil is extracted from oil wells, these wells can be very deep. The oil extracted is later refined to form petrol, diesel, aviation fuel, paraffin wax, lubrication oil, etc. Deposition of petroleum occurs with natural gas in the rocks called oil wells from where it is taken out by drilling. Refining is a process where the separation of various compounds of crude oil occurs. Fractional distillation is a process used to separate its compounds.

Crude Oil procured from an oil well is a mixture of many liquids. Different temperature evaporates a different liquid. This temperature is the boiling point of that liquid. The crude oil is heated to a temperature of 400-degree Celcius, is fed in at the bottom of the column and heated further. The liquid with the lowest boiling point changes into vapor first and condenses. At higher temperature, the next volatile liquid changes into a vapor state and rises.